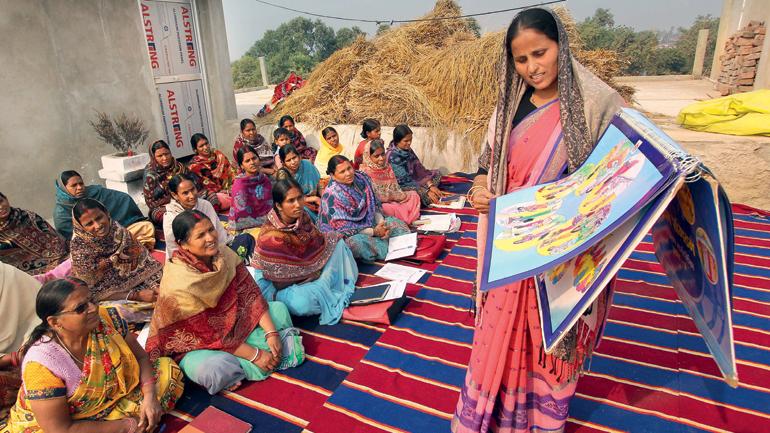 Sabina Khatoon was just 16 when she was married off to Mohammad Ekbal, a tailor in Seema village in Bihar’s Nalanda district, in 1998. By 2009, she was already a mother of five-two girls and three boys. It was a struggle bringing up the children. Ekbal, who worked as an embroiderer on daily wages, barely earned Rs 150 a day. It was then that Sabina heard of JEEViKA, the Bihar government’s rural livelihood programme co-financed by the World Bank. The scheme was initiated in 2006 to empower poor households by bringing women together under self-help groups (SHGs).

On becoming a member of JEEViKA, Sabina instantly had access to credit. She got a loan of Rs 5,000 and used it to purchase foodgrains for her family. That was the beginning. Taking a credit of Rs 2,70,000, Sabina, now 36, set up a tailoring shop for her husband. Ekbal, who had initially threatened her with divorce if she stepped out of the home to work or join any SHG, is now a proud employer, with three tailors working for him. All thanks to Sabina.

She is ensuring her children finish their education. Her eldest daughter, Khushboo, cleared her matriculation examination in 2015. Khushboo, in turn, convinced her mother to take up the same examination. In 2016, 18 years after her marriage, Sabina, coached by her daughter, appeared for the exam and passed with second division.

When the central government launched the National Rural Livelihoods Mission in June 2011, Sabina, owing to her experience and skills, was chosen as one of the resource persons from Bihar to help form SHGs in other states. Now, she tours states like Uttar Pradesh and Madhya Pradesh for up to three months a year, earning Rs 1,700 a day as allowance. This year, she repaid all her loans and even added a room to her house.

JEEViKA provides women hassle-free access to bank credit. With a bench strength of over 8 million rural women, each saving Rs 10 every week as SHG members, these women have collectively saved more than Rs 419 crore. With a proven credit history, SHGs are able to leverage larger credit amounts from banks. They have also procured loans of over Rs 3,200 crore from banks.

With soft loans, JEEViKA has helped rural women turn small entrepreneurs or support their husbands in their business, the spin-off being that women have emerged as an important economic force in the state. JEEViKA aims to empower rural poor households, both socially and economically. This is being done by developing SHGs and federations to enable women to access better services and obtain credit for self-employment. This, in turn, is improving the livelihoods of households. In July 2015, a group of JEEViKA women had requested Chief Minister Nitish Kumar to impose a ban on liquor. The chief minister made a promise and imposed prohibition next year.